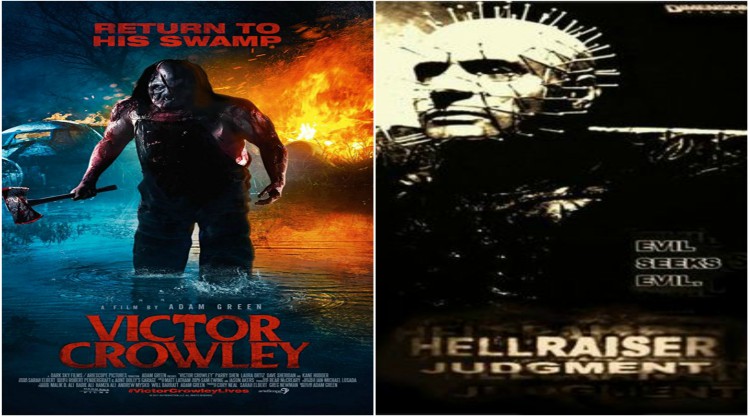 It is considered a good day when just one trailer is dropped, but today there were two; the first for Hellraiser: Judgement and the second for the fourth installment of the Hatchet franchise, Victor Crowley.

This film was originally slated for a 2017 release, but was pushed for unknown reasons. Instead, it will be distributed by Lionsgate via digital and home media platforms on February 13th.

Unfortunately, Doug Bradley will not be playing Pinhead; he has been replaced with Paul T. Taylor (Sin City).

Plot: Detectives Sean and David Carter are on the case to find a gruesome serial killer terrorizing the city. Joining forces with Detective Christine Egerton, they dig deeper into a spiraling maze of horror that may not be of this world.

announcement and viewing of the fourth franchise film, Victor Crowley. He took the film on a theater tour, and the film will see a blu-ray release on February 6th. It is currently 3rd on Amazon for pre-orders. Adam is also offering signed copies at Ariescope.com. Green is cautioning fans who have yet to see the movie that the new trailer gives a little too much away for his liking, so view at your own risk.

Plot: Ten years after the events of the original movie, Victor Crowley is mistakenly resurrected and proceeds to kill once more.

Which movie are you most looking forward to?